There are now 21 days between the release candidate and WordPress 5.8.https://t.co/50jvlOQ9GP pic.twitter.com/Jd1jsdeel6

The roadmap has been updated this week. WordPress 5.8 will be released in July and 5.9 in December. So, we’ll only have three WordPress Core Updates this calendar year. Yes, breathe a collective sigh of relief. Thank you, Josepha, for listening to the community.

“Here are a few things that might make this communication more difficult. If you can think of other communication challenges (or solutions to the ones below), please share them in the comments. We don’t have established communication channels with theme and plugin authors.” 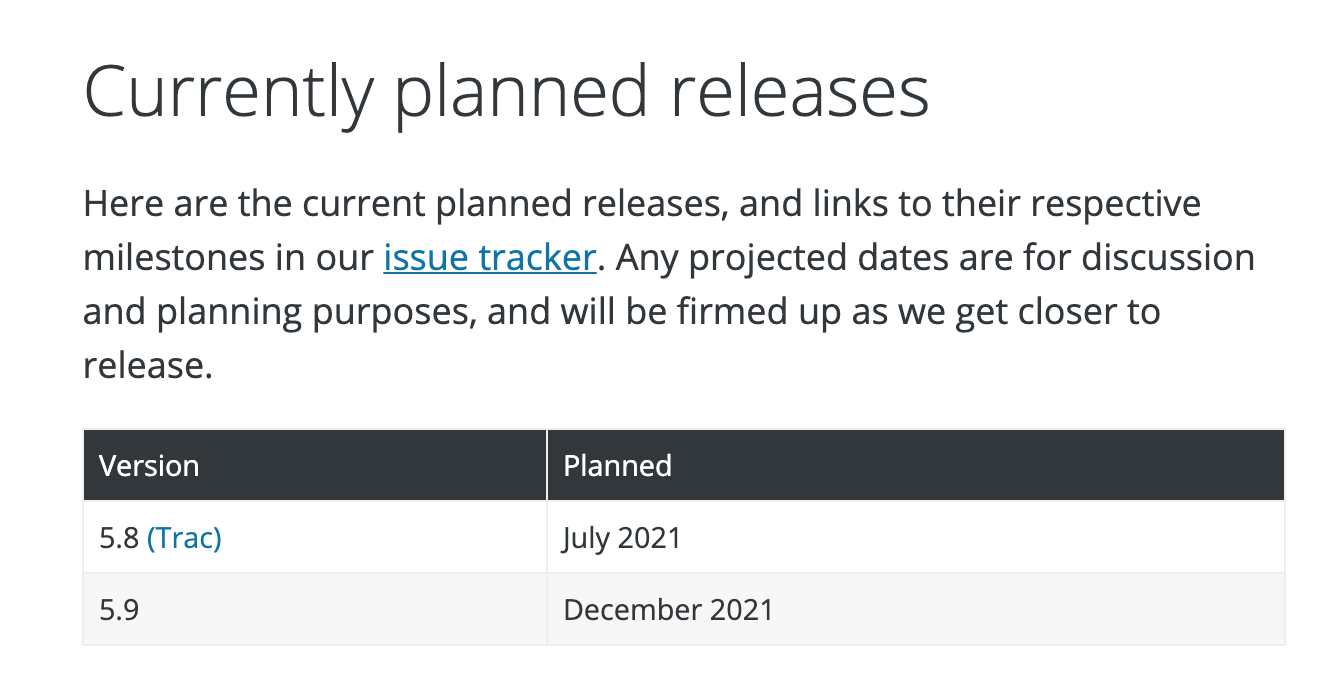 Just when you were getting used to WordPress 5.6 and all of the jQuery issues, you’ve got more work to do, plugin devs. Don’t stop testing your themes and plugins. The next WordPress Core Update (5.7) is coming on March 9, 2021.

In fact, there will be three WordPress Core updates in 2021 according to the roadmap. This is a healthy, yet robust schedule for plugin and theme developers. I suspect mostly for plugin developers.

The best marketing for a WordPress plugin is smooth updates for your users.

The First WordPress Core Update of 2021

WordPress 5.7 is currently open for bug scrubs and alpha contributions. So if trac is your jam, now is the time to contribute.

For plugin developers, you’ll want to get ready for the beta which will be available on February 2, 2021.

The release candidate for testing will be available two weeks later (Feb 23) and the WordPress Core update launches March 9.

Yes, the release candidate will be out in 62 days or 39 business days.

It is hard to keep track of all of these updates, I know. You can subscribe to WordPress Core updates on Make.WordPress.org.

First the good news. WordPress 5.6 “Simone” dropped on December 8, 2020 and I’m happy to have been listed as one of the contributors. (Yes, this marketer has brackets.) I reviewed copy on a few Trac tickets as well as editing and rewriting the baked-in copy on a few default themes.

What went wrong for me?

For people who were hosted by companies like Pressable (I’m now on SiteDistrict), it was an irreversible auto update for major core. Meaning, 5.5.x automatically updated to 5.6 without the ability to roll back. Normally, I’d be fine with that until I started building a landing page.

But the website didn’t break, you may say. Or did it? So, to me something “not working as expected” is a break. I was creating my landing page for my new book, “How To Market Your Plugin,” and needed to clone a form. Something that should have taken 20 minutes copying my Beaver Builder template and cloning my Caldera Form took two hours.

So, I spent about two hours the week WordPress 5.6 came out Googling and submitting support tickets to both Caldera and Pressable. I had no idea what was wrong. Pressable ended up installing the jQuery Migrate Helper plugin which solved the problem. Two days ago, Caldera rolled out an update that fixes that issue, so I deactivated and deleted the jQuery plugin (as per best practices).

Then I decided, I needed the option of, well, opting out of auto updates for WordPress Core. So, I moved my hosting to SiteDistrict, too. I’m fairly certain I lost four hours of billable time for that update and migration. It’s all part of supporting Open Source, right?

As an aside, you may want to read the WordFence article about the REST API application password vulnerability.

Hey, I’m all about software updates. I’m the first to update my iOS apps and Google Chrome and even WordPress. I have Updraft backing up my site and it’s all good. You know? I’m for it.

It's better marketing for plugin developers to take an active role in ensuring their code works with the release candidates. Click To Tweet

You’ll have four, 14-day periods of testing to do in 2021. I suggest blocking out time in your production schedule and company calendar. You’ll be busy with support tickets if you don’t and your social media manager will be pinging you in Slack with all of the complaint tweets.

This cycle will have a similar timeframe than 5.6:

** This post as my affiliate link for Beaver Builder. http://bit.ly/BuyBeaverBuilder

Posted in Tech Reporting
← How Can I Manage My Twitter Account’s Suggestion Feed?The Definitive Guide To Twitter Marketing Strategy →

Observing human behavior and predicting it is what makes the way I approach content management different. I mirror your voice in my social media management. I analyze your dreams when I consult. I think deeply and respond appropriately. I have time to work on your business. Do you?

View all posts by Bridget Willard →

This website uses cookies to improve your experience while you navigate through the website. Out of these, the cookies that are categorized as necessary are stored on your browser as they are essential for the working of basic functionalities of the website. We also use third-party cookies that help us analyze and understand how you use this website. These cookies will be stored in your browser only with your consent. You also have the option to opt-out of these cookies. But opting out of some of these cookies may affect your browsing experience.
Necessary Always Enabled

Performance cookies are used to understand and analyze the key performance indexes of the website which helps in delivering a better user experience for the visitors.

Analytical cookies are used to understand how visitors interact with the website. These cookies help provide information on metrics the number of visitors, bounce rate, traffic source, etc.

Advertisement cookies are used to provide visitors with relevant ads and marketing campaigns. These cookies track visitors across websites and collect information to provide customized ads.

Other uncategorized cookies are those that are being analyzed and have not been classified into a category as yet.

SAVE & ACCEPT
Scroll To Top