Of course, it depends on what you want to achieve and how much money you want to waste — er — spend. Overall, the native app is the best way to manage Twitter with a couple additions. And, if you want to read my long post on Twitter Management, it’s on this site.

How Many Apps Do You Want?

I don’t want to go back and forth doing this and that and the other. Do you? If you automate, then you are at risk for set-it-and-forget-it. This could be bad. I’ve seen it go bad. The same goes for auto cross posting from platform to platform.

If you’re not checking the notifications on a platform, why even be on it? It’s like having a monologue at a party. Pretty soon, people will leave your presence. No one likes that one guy who won’t shut up about himself.

What is Your Budget?

Many agencies prefer to use a tool that is a dashboard for all of their social media profiles and engagement. These software platforms come with features that will cost you a pretty penny.

I have peers who swear by Sprout Social. That’s going to set you back between $100 and $250 a month. If it provides what your social media agency needs then go for it. If it’s just for your small business, it’d be better to hire someone.

I used to use Buffer to schedule tweets. Then I used Timely which changed to Minideck and both of which have been sundowned. Buffer will set you back $15 – $100 a month. That’s a fairly affordable option. The thing with Buffer is, that it needs to be filled. So, tweets still have to be curated. It’s not really helping you manage much. You can’t reply. You can’t look at lists.

Agoura Pulse will cost you a pretty penny — up to $400 a month. It allows you to assign tweets to a team member to respond to, have tweets approved, and allows you to reply. Sure, Dove uses it. But they sell more soap than you do, right?

My stack of tools for Twitter management with over 10 clients costs me $30 a month. That’s it. If you are a social media manager, maybe you want to keep your tool belt slim.

When people ask what I tool I use to manage Twitter, they’re often surprised that I say Twitter.com. This is where you create lists, setup your profile, look at analytics, follow and search for people. The mobile app has some of those abilities but not all.

I only get emails when someone sends me a DM and only for my account. Push notifications on social platforms are dangerous for your productivity. Use time blocking instead.

Download the mobile app so you can tweet on the go — or just not at your desk. Social media management isn’t a 9-5 job. I check my notifications during all of my waking hours.

As an aside I strongly recommend against push notifications. Fit Twitter management into your life, don’t let it interrupt yours.

The most under-utilized feature of Twitter is lists. If you want to focus your attention on certain segments that you follow, Twitter Lists is priority number one. Make the top 3 lists (customers, vendors, leaders) columns on Hootsuite (see below) and you’re 85% there.

Twitter plus Hootsuite is my two tools if I were stranded on a deserted island with high-speed WiFi and Diet Coke.

Twitter’s Card Validator tool helps when you change a featured image on your own blog. It will show you what Twitter sees as far as Open Graph Data goes. I have an entire tutorial on how to set up your blog posts properly.

Some people just add a photo to the tweet and use a link. But that won’t really fly when someone else shares it. Just sayin’.

Twitter’s analytics are awesome. You have to turn them on, by the way. I pair this with a Google Sheet to track the five main metrics of tweets, impressions, profile visits, mentions and followers.

I like the tweets to profile visit ratio to be above .20. The profile visits is important because it means that a user saw your tweet, clicked on your username/handle, and then looked at your profile. So much about your audience can be learned from Twitter’s analytics; I wrote about that.

Hootsuite is my “Twitter management tool” of choice. I put that in quotes because there is no one tool that does everything I need or want. If there was one tool that actually helps you manage, it’s Hootsuite. I pay for Pro because I manage more than 3 accounts. I also only use it for Twitter.

Hootsuite Pro will set you back $30 a month. It is worth every penny. Every. Red. Cent.

Some people like TweetDeck but I haven’t liked them since Twitter purchased them. One of the bonuses about Hootsuite is that the mobile app has the same organization as the web app. This is key to making use of lists as well as hashtag or domain searches.

I even use a combination of Twitter.com and Hootsuite to participate in Twitter chats. Carol Stephen hosts a Twitter chat every Tuesday called #DigiBlogChat and her toolbelt is listed in her article.

I use Google Sheets for two reasons: 1) basic reporting; and 2) content curation for my basic and pro Twitter plans. Also, sometimes Twitter loses data. Don’t just rely on them. Have a backup. People who care about metrics can read spreadsheets.

I aggregate the values from Twitter’s analytics in a Google Sheet.

Until Twitter removes the requirement to have a 1:1 following:follower ratio to grow your account beyond 2,000, 5,000, 9,000, 14,000, and 19,000 followers, I have to unfollow accounts who don’t follow back. This is why I like who.unfollowed.me. If you have people listed, you can still pay attention to them in your Hootsuite columns.

It’s pretty rude to build your brand on the back of followers and then dump them so that your vanity shows you have x followers and you follow 47. If that’s the message you want to send your followers, just buy a bunch of spam people. It’s social media. Don’t be a jerk.

Revive Old Post is a WordPress plugin that is free and has a paid version. I only use this for my own Twitter account. I recommend it for clients who want to ensure their blog posts are being cycled on Twitter. I don’t recommend using it for other platforms as the culture on those platforms does not support repetition.

You should always look at your website’s Google Analytics to see how much traffic is coming from Twitter and what the time on site is.

As a social media manager, I rarely have access to this for a client, but if you do, try to get time on site at 2 minutes or more. It means people are reading. Also, I wouldn’t worry about the bounce rate too much. If you answered the question for the reader, there is no reason for them to stay. 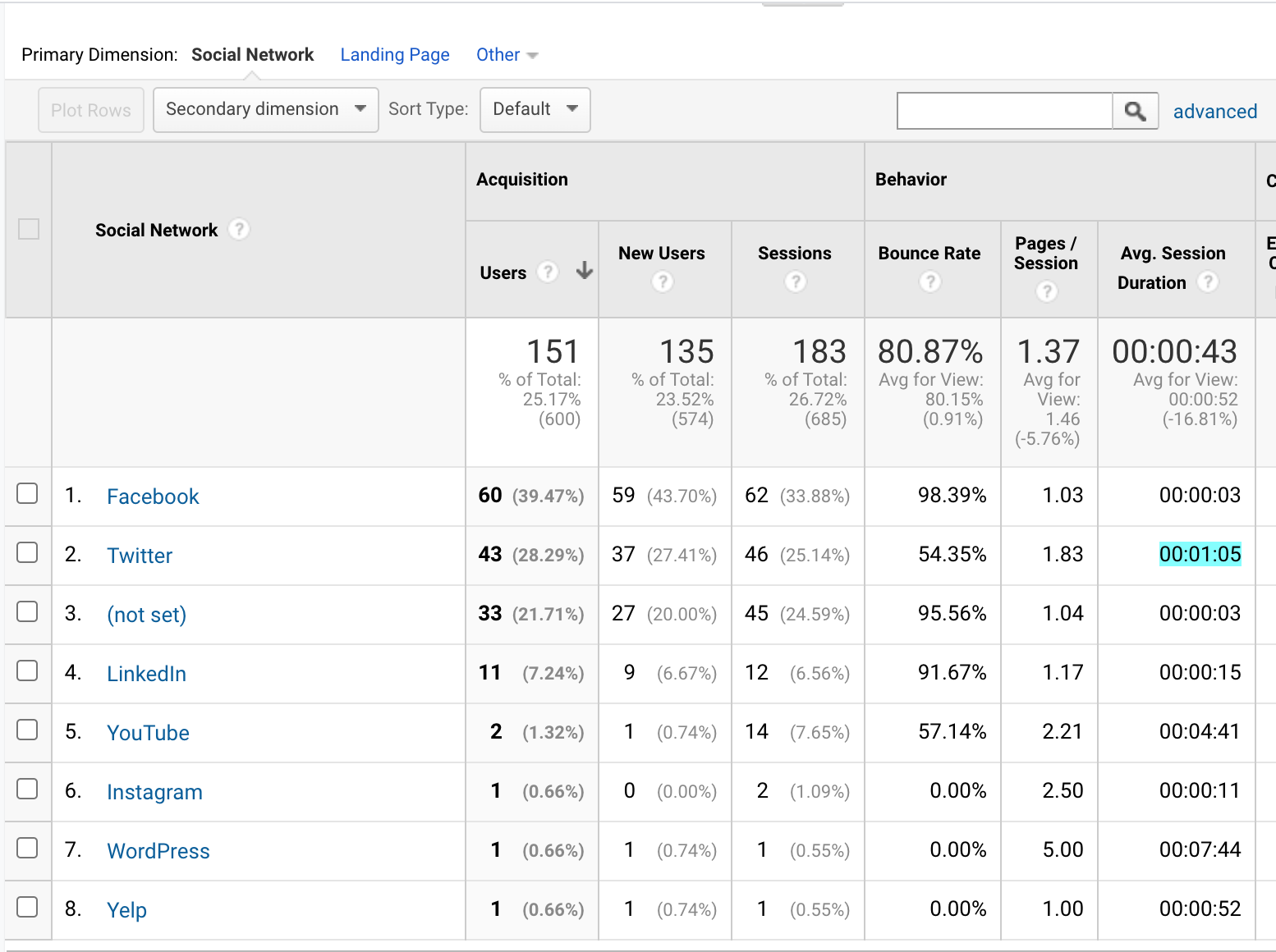 My time on site is low for Twitter because I am only posting every 37.5 hours right now. If I posted more, it would go up. I also haven’t published in 4 weeks.

I am a huge fan of bit.ly and shortened links in general in tweets. This makes it much easier for people to retweet with the copy / paste method and looks much better.

The combination of bitly.com and the Chrome Extension is a must for Twitter management.

Are you wondering which tools I use to manage Twitter?

Then you'll love these 11 tools.https://t.co/BTo0iS5hLr#TwitterManagement#SocialMedia

Twitter management isn’t for the faint of heart. It’s important to be a practitioner; stay in Twitter as much as possible. This allows you to see any UI/UX and feature changes that Twitter implements. That affects your tactics.

For example, in May Twitter added scheduling to Twitter.com. That’s pretty amazing. You can also use GIFs when you’re on Twitter native. You can’t do it from Hootsuite.

Try not to rely on too many tools outside of the native platform. You’ll become so distant that you are at risk of being out of touch and tone deaf.