Twitter Animated GIFs are a fun way to bring emotion and the power of mirror neurons in your brand’s communications. Twitter is the perfect place for GIFs. Before we talk about the five reasons, let’s talk about what GIFs are and where you get them.

GIF stands for Graphics Interchange Format and, for all intents and purposes, is a tiny, looping video. The pronunciation (Jif or GIF) has been widely debated, but that’s beside the point.

GIFs go where Emoji cannot. Emoji are fantastic for decorating text messages. Emoji can be awkward when it comes to screen readers or the average user who scans messages.

It’s important to understand that emoji are difficult for screen readers whereas alt descriptions can be entered for GIFs.

How Do I Find a GIF?

GIPHY and Riffsy are large GIF libraries. Generally, you enter a word or phrase and results come up. Twitter has had GIF functionality since 2016. When you compose an original tweet or reply, one of the icons at the bottom of the compose window is for a GIF. The others are for Photo, Poll, and Emoji.

“Our GIF search includes all the GIFs you know and love, courtesy of our partners at GIPHY and Riffsy.” Twitter

“Most notably, Giphy  provides built-in search and sticker functions for Facebook’s Instagram, and it will continue to operate in that capacity, becoming a part of the Instagram team.” TechCrunch 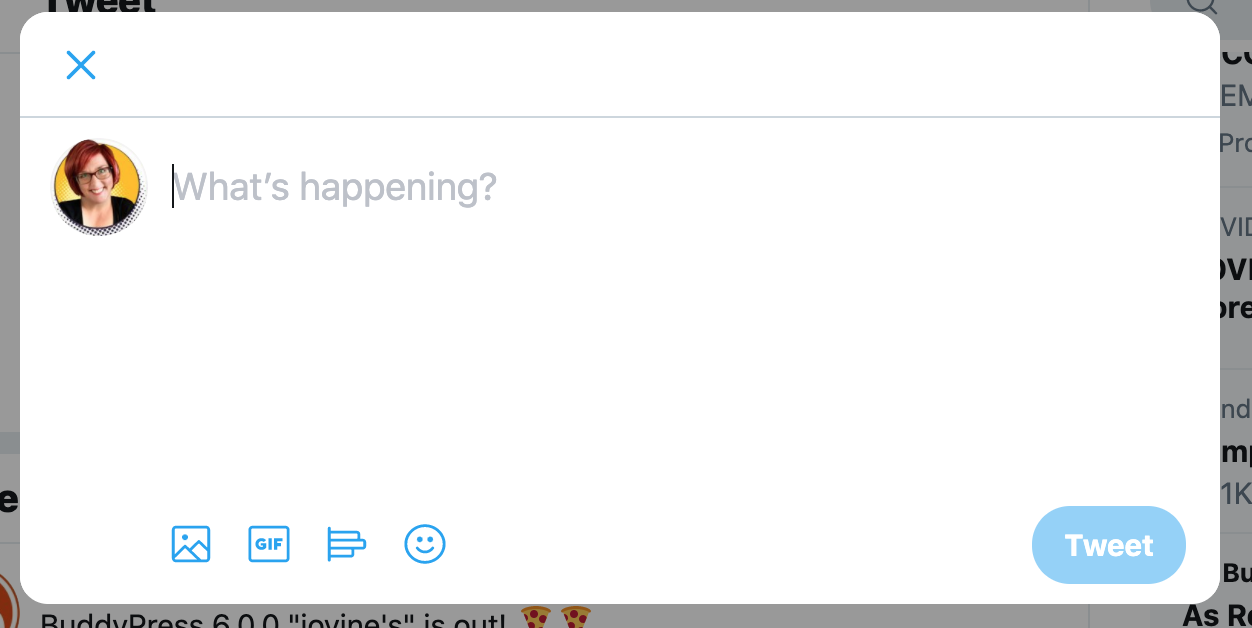 When you compose a tweet, be sure to click the GIF icon library so you can search. When the tweet it sent, the GIF is a pic.twitter image.

Can I Make My Own GIFs?

One of the cool features of the iPhone and Twitter mobile is that you can convert Live Photos into GIFs. This works best when you have a strong WiFi signal though. It can be very frustrating to tweet this way in 3G.

Friend: “Do you need anything from Costco?

You can make your own GIFs with YouTube, Photoshop, and more. I use Recordit.co to make GIFs of small screen sharing situations to share on Twitter. It’s all up to you.

Level Up Your Tweeting with GIFs

There are so many ways to create your own GIFs and use online libraries. When your brand uses GIFs, you elevate your branding, express yourself, exhibit emotion, extend culture, and enhance communication.

“With 80% of Twitter users using mobile, usually, their sound is turned off, giving GIFs an advantage over videos.” Oktopost

Elevate Branding with Twitter Animated GIFsI’m proud to have Ninja Forms as a new client. One of the things we collaborated on is using GIFs to express thanks and otherwise elevate the branding. One advantage of Twitter mobile over desktop Twitter (and third-party apps) is the “recently used” function.

You can also create your own GIF that enhances your branding like Rhonda Negard of FatDogCreatives.com did. It’s friendly, fun, and memorable. That GIF will not be in Twitter’s library, however. So, keep that file in your phone’s camera roll or on your desktop.

One day, when the stay-at-home order started, I included Lucille Ball GIFs in all of my responses. It was hard, but fun. It enhanced my brand as funny and friendly. I also kept my conversations interesting and light-hearted during a really tough time.

I wonder if today all of my twitter responses could be done with Lucille Ball GIFs. pic.twitter.com/5D1YUknYJN

It would be very difficult to simultaneously work and homeschool. pic.twitter.com/Grlq0c6jWN

Mirror neurons are what causes a baby to return a smile. We are engineered to mirror other people. Generally, with the exception of people with an affect disorder, our face communicates more than our words ever could.

Writing an expressive tweet is important. At times, however, showing empathy is best with a GIF. Sometimes it’s a hug, shaking your head in disgust, spitting out your coffee laughing (my personal favorite), making a point, or celebrating victories.

If you think marketing is magic, you may be thinking of a genie. pic.twitter.com/XfgaPNA00W

If your brand or company culture involves inside jokes or famous movies, this is an excellent way to use a Twitter animated GIF. GIF parties are occasions to use a bit of your spunky side, too.

“It wouldn’t be a #GIFparty without a touch of snark. Kudos to Grumpy Cat for rising to the occasion and showing us all how it’s done.” Convince & Convert

I have a good friend who loves Disney movies. Sometimes, I make an effort to use a Disney GIF in my replies to her.

I'm so glad you're back to blogging, friend. pic.twitter.com/G0APXIfFx0

Edge of the Galaxy has an easy task integrating Star Wars GIFs into their tweets as well.

GIFs allow you to go beyond the words. It helps with making your communication clear, friendly, and, more importantly, relatable.

“GIFs tell a story, usually better than words+images and in a shorter timeframe than full-fledged video.” ShareThis

I especially think they are fun when it comes to bringing in humor. Humor is very difficult over text. With the animated GIF, the conversation is friendly instead of being perceived as aggressive or negative.

Now that you have five reasons to use Twitter animated GIFs for your brand, what are your thoughts? Will you create your own GIF or use a specific set of GIFs in the library? I’m super curious how you will use it.

Observing human behavior and predicting it is what makes the way I approach content management different. I mirror your voice in my social media management. I analyze your dreams when I consult. I think deeply and respond appropriately. I have time to work on your business. Do you?

View all posts by Bridget Willard →