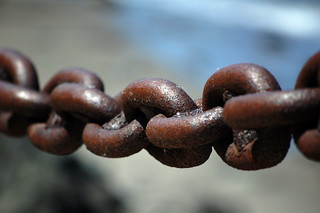 Do you ever find yourself scrolling through the home feed or one of your lists, looking for a little bit of conversation, only to find link after link after link? Sometimes, I just want to be able to reply to a tweet without having to read a blog post first. That got me thinking.

If I, a member of the Twitter audience, don’t always have (or want to take) the time to click on a link and read the article before responding or retweeting, then why should I expect my audience would have a different sentiment?  I came to the conclusion that only tweeting links asks a lot of your audience.

Tweeting only links asks a lot of your audience. I think I need to start mixing it up.

I’m guilty! This post is as much as a confession as an admonition. Including work, I have three Twitter accounts and four blogs. Though I’m not on a regular blogging schedule, I’m producing content and, of course, I want people to read it.

It’s so easy for us news junkies to read an article and tweet it out. The blogger junkies write blogs and tweet it out. And after a while, if you look at your own feed, you may realize that you are, indeed, a linker. Maybe it’s a good time to mix up your content. Carol Stephen discuses it in her blog post, “Tweeting for Engagement: Links Versus Text?” In the comments she brings up a good point:

“I like the idea of having tweets that are complete thoughts, that require very little of your audience as far as clicking and reading~that idea seems considerate.” Carol Stephen

I know many people don’t think they have anything valuable to say, but I would disagree. You have opinions, opine. This is what Twitter is about. Whether you want to talk about who had the worst dress at the AMA show or who should be the next Ambassador to the U.N., you will have an audience of like-minded people – they may even overlap.

But if you do tweet with links, here are some of the best practices.

The fact of the matter is that links get broken. Un-shortened links when copy/pasted into an Old School RT can sometimes lose some of the characters. Remember, in a link, one character missing can make it break. Other times, the web page is taken down or was redesigned. You never know.

Always, always check your links before tweeting. This is especially important for those of us who keep tweets to recycle, either in a text or Excel file or from our favoriting. You could stop reading at this point and still dramatically improve your tweeting.

For the reason above, shortened links are easier to copy and paste, etc. Also, sites like bitly.com give you statistics for your links if that’s what gets your engine running. There’s some debate about this so I won’t push it too heavily. That said, unless it’s a photo on Twitter, I shorten the link.

Bitly’s analytics show how many times a link was clicked on. For those un-clicked links, I sometimes tweet it again, maybe with a different headline.

Let’s face it. Not all of us are the best copywriters. If you want to write better headlines, Copyblogger is your go-to source. Check out “How to Write Headlines That Work.” More often than not, I find a sentence in the article that appeals to me and I tweet that as a quote instead. Here’s an example from yesterday:

"Greetings are what get us going in any relationship." @Carol_Stephen http://t.co/QFL8uDZdCR #SocialConversations

Tweeting quotes from an article, even if they’re your own, is a good strategy if you want to repeatedly tweet out an article but don’t want your Twitter timeline to look spammy. You’re welcome.

If you read it on Facebook from your friend who you know is on Twitter, give them a hat tip at least (h/t @username at the end of the tweet). If you read it from Mashable do the same (via @Mashable). We don’t always find things on our own, giving credit shows you are humble and generous at the same time.

In the spirit of giving credit, this blog post was inspired from discussions and brainstorming with my good friend Carol Stephen. Follow her on Twitter at @Carol_Stephen.

Have you ever clicked on a link that takes to you a site with only a teaser paragraph? Then it says “read the story here” with another link, so you have to click again and wait for the page to load, click away pop-ups — all just to read the story. That doesn’t even mention the hoops you have to jump through on your mobile device. It drives me crazy.

After I play link hopscotch a few times, I start ignoring their tweets entirely. I realize there are financial reasons why people do this, but as a user it’s beyond annoying. Are you really making enough money off of the affiliate link to justify the inconvenience and frustration to your audience?

The same goes for paywall sites. I don’t subscribe to Financial Times, yet I see their links tweeted often.  Either check the link to make sure all of the article can be read by your audience before you tweet or tweet it with #Paywall at the end as a warning. Our local paper went to the paywall model a while back. Not only do I never read it now, but I refuse to retweet any links from them. (I often wonder how many clicks they’ve lost because of the paywall.)

Have you had trouble with links? Do you delete tweets with broken links? Leave your Tip #6 in the comments below.