One of the best parts of remote work — even as a self-employed person — is the freedom to work anywhere. In this case, it meant moving out of state.

“I’ve been thinking ’bout catching a train
Leave my phone machine by the radar range
Hello it’s me, I’m not at home
If you’d like to reach me, leave me alone”  Sheryl Crow et al

Remote Work is About Freedom

There really is no reason why people should have to be forced to work in the same building. Seriously. Especially if all of their work is done in the cloud. It’s about control or the appearance of control. If work is about the actual work, the deliverables, then we should be accountable and compensated as such.

I was fortunate enough to be accountable for my deliverables during my time as Director of Marketing at an advertising firm. I will never go back to selling the time it takes to produce high value work. But that’s another blog post.

I started freelancing in October 2017 out of necessity. It quickly became my preferred business model. And yet I hadn’t fully taken advantage of my location-independence. I had changed my hours and I had changed my billing rates. I created half-day Fridays and I was able to travel and work at the same time.

What I didn’t change was my home base. My very sentimental, expensive home. Until I moved to Texas last week.

My clients are all over the world — quite literally.

At the time one of them was living in Indonesia and is now in the Philippines after a brief stent in Europe. Another literally lives in an RV with his family so they can drive around the States. These two individuals kept reaching out to me privately.

Why do you stay in California? You’re location-independent.

I’ve been watching my friend @YouTooCanBeGuru move from afar on Twitter. I can’t tell you how happy I am for her. Moving is tough. I’ve done it 30+ times in my life all over the US. But she’s moving to get a fresh start. Which is the best and toughest kind of move.

I’ve written about surviving after the loss of my husband four years ago this past May. Surviving isn’t living. Surviving is base level. Surviving is being able to work and pay your bills. It leaves nothing left for enjoyment, arousal, inspiration.

Honestly, as a widow of a well-enough known pastor and person in the community, it left me with very little room for personal growth beyond his legacy. I felt like I was outrunning an avalanche of ghosts. The parade of people who had died. The ghosts of relationships past — family, friends, memories. It was too much.

To thrive, to be at peace, to be in a space that is created for me, I needed to leave. It became apparent on a Texas work-cation this summer. My two very close friends began to urge me to look at neighborhoods and pricing.

I remember thinking, I just need to decide. I was texting Sarah Phillips while walking to my motel room and she said,

“Bridget, you just need to decide.”

I did. Almost immediately I got three business leads, two of whom are monthly clients now just about six weeks later. That was (almost) enough for  me. I put out a few more feelers, applied for an apartment, was approved, and like dominoes I moved into a two-bed, two-bath apartment in downtown San Antonio. 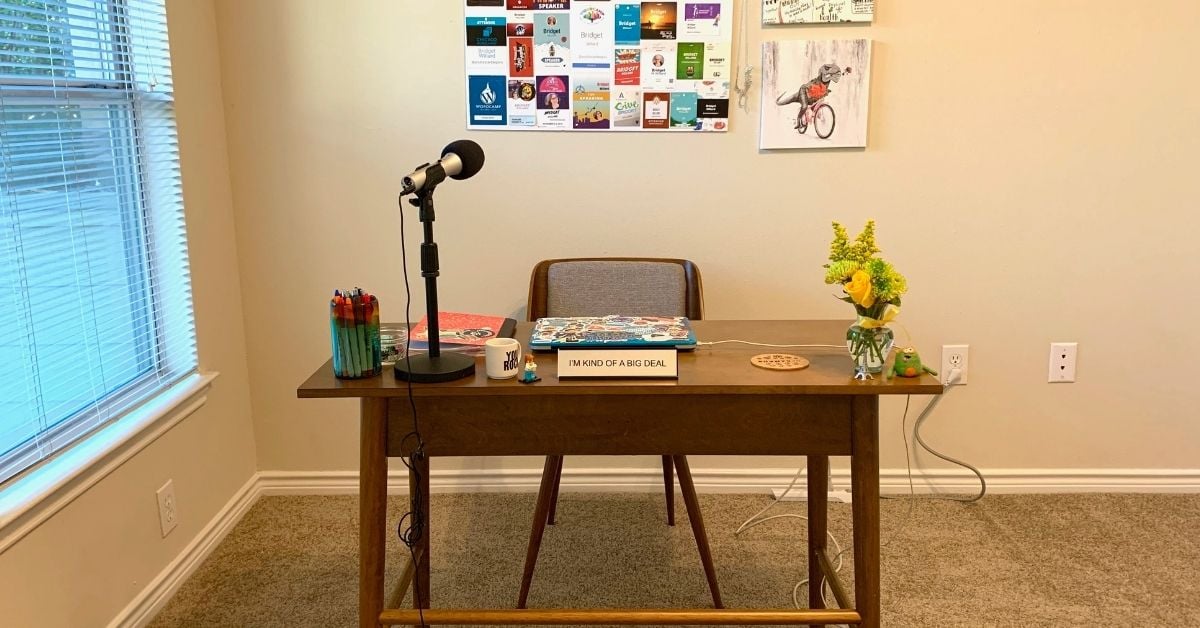 It’s nice to have a dedicated office space again both for the tax write off and for my mental health.

High overhead means less disposable income. It means I have to work myself into the ground in order to live. I was living to work. High debt (thanks to dental work) had me grinding. It resulted in a mental health crisis I wrote about elsewhere. I made a sequence of difficult decisions. I had to.

A month later, the COVID pandemic hit. I was financially fine — for a while. In July I lost a client. I lost another in August. That gave me extra time to think but also was below my nut. The stress began to mount to where several friends and clients told me I was burnt out. I had no idea why they were saying it. Until I did.

One day, I sat at my desk, laptop closed with the intent to write; I burst into tears. Big, giant, uncontrollable tears. Sarah knew it. She said, “Come spend time with me; I need help setting up my new home.” Maybe that was the reason, maybe it was a ruse, either way, it opened my eyes.

Seven months after my mental health crisis, I moved into my apartment in Texas — to the day.

During my work-cation with Sarah and since I’ve moved, I have been fishing, walked to a nearby park, spent hours upon hours alone driving on the road thinking and crying and praying, bought original art, and probably a whole lot more I haven’t even thought of.

Things that I will be exploring and experiencing soon include kayaking, tennis, and visiting the botanical gardens, zoo, and the modern art museum.

So @sarahpressler took me fishing! Wow. I caught 2 and she got the rest including the really big one! pic.twitter.com/g5biwP9sK5

Once I decided to leave the burden of California, I was completely empowered — mentally. It’s remote work that made this possible. I didn’t have to move for a job, hate it, and have nowhere to return. I didn’t move for some guy and either fit into his family or not.

The pace is slower, the costs are lower, I have fiber internet, a washer/dryer, and central air. My life is easier. All of my work is done in less than 4 or 5 hours a day. I can allow my body to rest. I can enjoy things around me.

I have agency maybe for the first time in my life. Freedom to really drive my life. It wouldn’t be possible without remote work.

Okay, here’s a P.S. since so many people have been asking.

Why Did You Move to San Antonio?